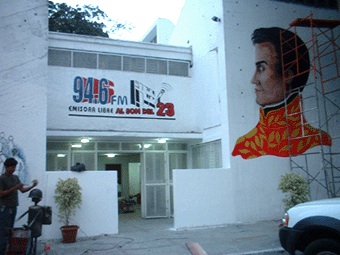 I walked into the radio station’s building. I had been told it was a jail for political prisoners in a barrio that overlooked the presidential palace before the election.

I guess it looked like it was once a jail. It had cinder block walls. It had that unmistakable institutional architecture feel. The kind of place that can be sprayed down and cleaned. It’s like everyone who ever built a jail or school went to the same class in some School of the Americas for architects.

But there were no more bars. And it didn’t feel like jail does.

Instead there were radio transmitters, and it felt like nothing I had ever experienced or seen.

A radio station had popped up where people had been tortured.

“This isn’t Chavez’s radio station,” said the young woman at the front of the room. “It’s ours.”

The message wasn’t anti-Chavez. It was as if she was making sure everyone knew that the changes that were taking place in Venezuela were as much hers as Chavez’s. The clinics that had been malls. The underpass turned environmental reserve. And, yes, the radio stations that had been jails.

I was younger then.

A little more open. My eyes seeing change for the first time.

The night before, in the hotel where I was staying, I had some drinks with some young [email protected] Once the alcohol hit them, they opened up. Having been in jails before and after Chavez, they didn’t notice much difference. They had an angry critique of their movement.

Their rage echoed through the lobby, pointed at themselves and anyone who questioned their revolution. In the middle of their version of change, they questioned everything and everyone. Especially themselves.

The radio station was no different. It was, like every street corner I was on, a hotbed of ideas, curiosity and debate. And music. And dancing.

The voices of Venezuela’s barrios were broadcast in direct contrast to corporate media’s 95% control of the market.

“If we recover I don’t know how many stations, it won’t be to give them back to the bourgeoisie. No, no. We have to create popular radio for the people,” said Chavez to the L.A. times.

To me, the station is a symbol for the way Chavez and the Bolivarian Republic of Venezuela has changed the story on what is possible for democracy and the economy when ‘common sense’ created by corporate media celebrates the market over the health and well being of citizens around the globe.

This change, not just systemic but cultural, is what I’m thinking about as the people of Venezuela work to hold on to their democracy and independence, and as they continue to inspire others with the story that another world is possible.