A Rejuvenating Week in Detroit 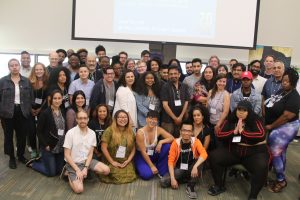 At a time when our communities and movements are under seemingly continuous attack, media justice leaders nationwide gathered at the Allied Media Conference in Detroit this June for an inspiring, cathartic, and ultimately rejuvenating week of community building. From our annual Membership Assembly on day one of the conference to the dozens of workshops led by members of the Media Action Grassroots Network (MAG-Net) throughout – culminating in our #MediaJustice Mixer – it was a powerful reminder of the knowledge, talent, and resiliency of this network, and all those fighting for racial, economic, and media justice today.

For more, check out some highlights below and visit our photo gallery on Facebook.

#MediaJustice activists coming together @mediaaction membership assembly at #AMC2018 to build relationships & vision what Digital Sanctuary can look like pic.twitter.com/tIRGizmnFO

“How do we work not just to win, but to build our movements.” #mediajustice #AMC2018 BD

Myaisha from team @mediajustice is discussing the #NoDigitalPrisons campaign at our Membership Assembly in Detroit. Read the blog series to learn more: https://t.co/PsQPsqkMI3 #AMC2018 pic.twitter.com/FIOQoOOU6I

“Narratives save lives. When young people can tell their own stories and interview people from their own communities, they get to really honor themselves and their communities.” – @RobertaRael of @genjustice in the #OwningOurStories workshop at #AMC2018 #MediaJustice pic.twitter.com/FbUFLduOw7

Stay connected with the media justice movement by signing up for our e-mail list!

THURSDAY: Rep. Tlaib Joins Activists of Color to Urge Action to Root out White Supremacy and End Criminalization of Black and Brown Dissent