“A Lifeline for Families”: Advocating for Prison Phone Justice in D.C. 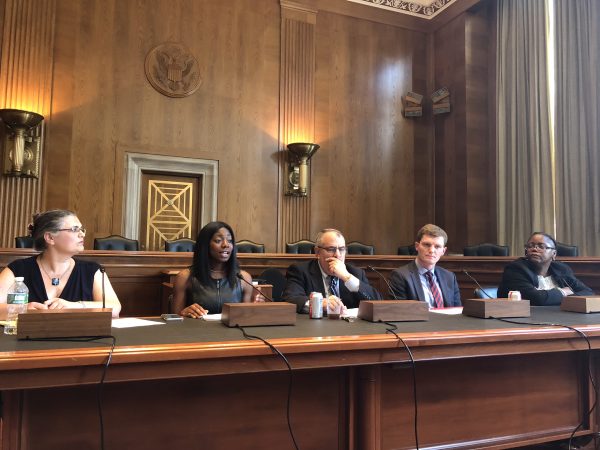 To kick off the day, former FCC Commissioner and longtime prison phone justice advocate, Mignon Clyburn, reminded the delegation that maintaining strong relationships between families and their incarcerated loved ones is pivotal to safe and successful reentry into society. Unfortunately, due to high costs low-income families incur to support a loved one in jail or prison, 2 out of 3 families must decide between meeting basic needs, such as purchasing groceries, and speaking with their family behind bars.

.@MignonClyburn kicks off our #PrisonPhoneJustice advocacy day by reminding us that strong relationships between families and their incarcerated loved ones is critical to the process of reentry pic.twitter.com/tIeu0R7lr8

“When prison phone calls are affordable, there’s a huge impact on families”, said Myaisha Hayes, a National Field Organizer at the Center for Media Justice, during the delegation’s conversation with South Dakota’s Senate Commerce Majority about the positive effects of continuous, strong connections between families and incarcerated loved ones.

The advocacy day culminated with a lunch briefing to further discuss the urgency needed to usher in prison phone justice via S.2520 and how high the stakes are for individuals, families and entire communities that are negatively impacted by broken bonds.

In the videos below, Tunisia Owens from the Ella Baker Center for Human Rights and Wandjell Harvey-Robinson from UCIMC share their perspectives and call-to-actions to bring about prison phone justice in communities across the country.