Leading up to Valentine’s Day last week, the Center for Media Justice and the Praxis Project set Twitter ablaze with the #NotLovinIt Twitter party in response to recent news about rural youth, mostly of color, who do their homework at McDonald’s because it’s the only place to get free WiFi access. Using the hashtags #NotLovinIt and #MediaJustice, activists and advocates pushed for the necessity of free public WiFi and school and library funding not only to its base and larger social media community, but to key journalists and outlets.

Memes like this one were also created and shared out on Twitter and other social media platforms: 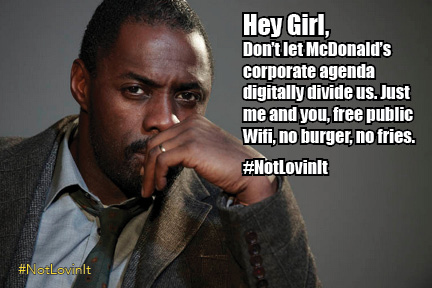 Twitter is a useful tool to take the pulse of your social network on current events and your issues, as well as leverage the social media influence of your community. A Twitter strategy can be a game changer for many organizations and campaigns and can build your credibility, establish your voice and connect you to your members, potential donors, allies, partners, and even organizing targets. One specific features of Twitter is “lists” by which you can organize Twitter users—like journalists—into private or public lists.

Your first task in using Twitter to engage journalists is to identify who’s reporting on issues or geographical areas relevant to your work. You can use free websites like MuckRack.com to search a database of over 10,000 newspaper, magazine, blog, web, TV and radio journalists by their Twitter handles. MuckRack also allows you to subscribe to live Twitter media lists that are automatically updated and has a Twitter monitoring service. If you have access to a media database like Cision or Vocus (or are a CMJ client who asks for press lists), many journalists list their Twitter handles there, as well as on the contact page of their outlets’ websites.  One study found that more than half (55 percent) of journalists use social channels such as Twitter and Facebook to find stories from known sources, and 43 percent verified existing stories using these tools.  Here are some examples of how different journalists are using Twitter to engage with their communities.

As with any—and I repeat, any—successful use of Twitter, you have got to listen and engage. Twitter is a two-way endeavor and requires you to get to know the people you’re following and converse with them, whether through retweets, mentions, or replies. Learn what the journalists you’re interested in use Twitter for, who they are mentioning and talking about, how often they’re on, etc. What outlets do they like? What blogs do they read? Who do they talk to on Twitter? What do they care about?

On your end, you can try to get on their radar by retweeting their updates, sharing out and thanking them for articles, asking your followers to talk about a recent article by the journalist, or by tweeting stats and potential newshooks directly to them. 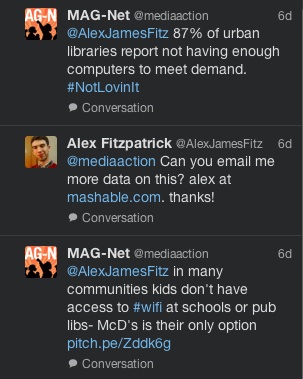 While many journalists don’t respond to random direct messages or mentions—particularly from people they don’t’ know—they do use Twitter for leads, story ideas, even breaking news—or to share out their own work. Try to find ways to be useful to them! Ask them questions! Don’t be annoying! You can also find ways to participate by identifying and joining Twitter conversations hosted by news outlets, organizations, or campaigns. It seems like a lot of work, I know, but if you are able to successfully build a relationship with just one journalist through Twitter, that is a tremendous gain for you, your organization and your work.

We have a CMJ communications clinic on “Social Media Strategies for Social Justice” coming up in March – we’ll keep you updated on that and other opportunities out there to learn more about how to use Twitter to your advantage.  And don’t forget to check out CMJ’s free Twitter primer for the novices among you.