News for All the People 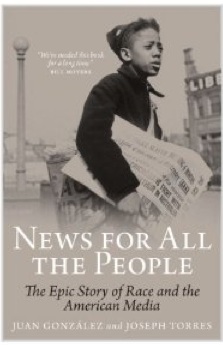 Access to instant news has become so indispensible to modern society that major media companies now wield unprecedented influence over public thought.  The media amplify those events they wish to while exiling others to the shadows; they fashion political and popular heroes one day only to tear them down the next; they interpret the meaning of the most earth-shaking or insignificant incident before our morning coffee or commute back home.

News for All the People

Juan Gonzalez and Joseph Torres (CMJ Board member) couldn’t have timed the release of their new book, News for All the People, any better if they tried.  As we watch major historical events unfolding around the world, we’ve had the opportunity to hear, see, and feel the voices and struggles of working class people from Libya to Oakland.  And as we look at mainstream media’s interpretation of these events versus what we are seeing on Youtube, Facebook, and Twitter – though there may at times be overlap, it’s also clear that there is a fundamental divide over who controls the content of news and how it gets transmitted.

News for All the People takes the reader on a sweeping yet thorough journey through the history of the American media.  They show, through anecdotes, stats, and archival research, that race has not been a marginal issue to the American press, but instead has been a main theme that has shaped the national, ethnic, and racial narrative of the United States.  And in fact, people of color have not sat on the sidelines as spectators despite what textbooks may tell us, but instead have been involved in media in all of its forms from top to bottom, from the get go.  Though the authors readily admit that this is not a “sound bite book”, it is a goldmine of information containing a secret history of both the heroes and villains in the fight for media justice.

“Every time, the promises were made that the newest technology will liberate the people,” said Juan Gonzalez during the News for All the People book tour stop in Oakland, California.  “And yet each time those in control and those with the money, have stepped in to rewrite the rules, creating a new form of enslavement of the population.”  Joe Torres reminded the Oakland audience that even at this moment, the government is deciding the fate of net neutrality and broadband access for the masses.  “Communities can win victories,” Joe said, “But we have to understand the losses and victories of the past.”  Though many of us have more access and forms of media that allows our stories to be told than ever before, we have to make it known that we do not accept a history rewrite, news is truly for all the people, and our news and outlets for spreading the news must be protected.