4 Ways to Use Satire to Harness (or Confront) Power

The use of humor, irony, exaggeration, or ridicule to expose and criticize people’s stupidity or vices, particularly in the context of contemporary politics and other topical issues

Political satire has been used for centuries as a means of entertainment, form of ridicule, and a method used to say things that under other circumstances- and certain regimes- would’ve been considered blasphemous.   Political satire is not considered in and of itself to be a form of protest or dissent because satire by definition doesn’t necessarily forward a political argument or agenda.

But when used strategically, political satire can be a powerful weapon that exploits the weaknesses of the status quo.  It can creatively move messages and get the attention of journalists and political figures, driving them to write, comment on, or acknowledge issues that are important to you.

This election year we’ve seen a lot of great uses of satire/parody.  Here are some examples of creative communications that you can adapt to your organizational needs to move messages and secure public wins.

Backstory: When Mitt Romney touted his father’s ties to Mexico in a series of ads targeting Spanish-speakers he got the serious #sideeye from cynics, who accused him of attempting to exploit [email protected] voters.  The charge gained traction when Romney was tape-recorded telling his wealthy (white) donors that he’d be better off if he were born Mexican.   Enter MexicanMitt, an alter-ego account that has amassed over 12,000 Twitter followers with his over-the-top commentary and rifts on virtually any quotes that come from the Romney Campaign.

While MexicanMitt’s use of stereotypes as satire is both loved and hated by progressives, there’s no doubting his influence – on the night of Romney’s Republican National Convention speech, his team allegedly put what amounted to a twitter gag order on MexcianMitt.

How you can use it: Creating “anonymous” or alternative online identities can be a potent way for organizations (particularly ones that have to stick to a more serious tone or voice) to use humor and creativity to highlight issues, challenge the status quo, and get away from traditional sector jargon.  Using characters that are sarcastic in tone, over the top angry, or an exaggerated persona with the same opinions as your opponent, are just some of the ways that you can add voices to a conversation and shift debates. 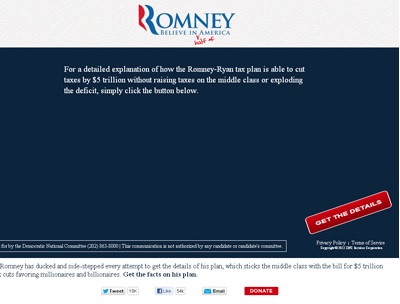 Backstory: The Romney/Ryan ticket has been notoriously vague when describing their tax plan, which is estimated to cost around $5 trillion (but magically won’t raise taxes on the middle class or increase the deficit). The Democratic National Committee came up with this brilliant website, which lampoons the Romney/Ryan ticket with an effective political ad that features a dodging “Get The Details” button and fake campaign logo.

How you can use it: Using a dummy/alternative website that mirrors your opponent’s and calls them out on their position (or lack there of) is a creative marketing ploy that sticks.  Particularly if you are taking on a corporation that uses a distinct logo/visual, you can use a symbol that is widely recognized by the public, and use it to disrupt their narrative while reinforcing your own.  Additionally, by creating an entirely different website separate from your organization, (like with an anonymous twitter handle) it also allows for bracing candor and a no holds barred critique of your opponent.  This has been used effectively by the Yes Men, the most recent example being their Bank of America website. 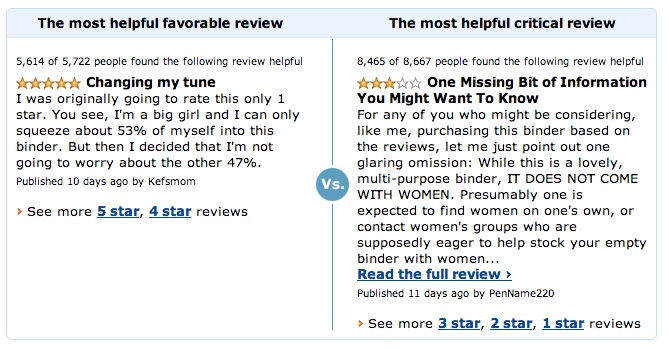 Backstory:  On the night of the second 2012 presidential debate, Romney declared that he was down for the cause of women, going even as far as demanding that he be brought suitable female candidates for cabinet positions.  He proudly proclaimed he’d been brought binders full of women leading to the meme heard round the world.  The Binders Full of Women Tumblr provided instant laughs (and great Halloween costume ideas), but by the next day some unsuspecting binder company become unwittingly caught up in the joke when their Amazon.com review pages became a gold-mine of comedic win with a stream of comments and reviews on the usefulness of their binders for housing women.

How you can use it: Though this played out more like satire strictly for the sake of comedy, the great thing about this is that writing a review is something accessible, and anyone can do one.  That opens up the door to merging creativity, humor and activism beyond traditional media forms.  Flooding a company’s product review page with satirical reviews and posts can be an effective way to call out companies publically and highlight issues of importance.  One of my co-workers recently mentioned as an example Bic, which launched an ill-fated marketing campaign targeting women with stereotypically girly, more expensive pens.  The Amazon review pages went rogue with reviews that, while hilarious, seriously blasted the sexism behind the company’s campaign strategy.

Backstory: Screenwriter, producer, and director Joss Whedon is a master at combining satire, horror and pop culture in his movies and television shows (which include Cabin in the Woods, Buffy the Vampire Slayer, and Dr. Horrible’s Sing-Along Blog).  In this video, Whedon endorses Romney as the perfect candidate. . .for a zombie apocalypse.

How you can use it: Using pop culture and iconic imagery and then making the link between that and the political, social, economic realities of communities can be used successfully to both highlight the absurdity of a opposition’s platform and bring an emotional reaction that people can feel and relate to.  You can use a zombie apocalypse to paint a dark vision of society, or you can use superheroes to talk about what power can look like, as CulturalOrganizing.org did in a recent blog.

Hopefully this got your creative juices flowing and shows that strategic communications can be funny while still effective.

As a disclaimer, we tried very hard to be bipartisan and find politically conservative examples that were non-offensive and/or funny and/or clever, however such a thing doesn’t appear to exist.  But if you find one, or any example of satire that you enjoyed this election season, please post it on our Facebook page.