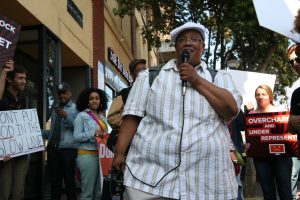 Malkia Cyril was recently named one of 2015 Heroes & Villains of Human Rights and Communications Surveillance by Access, an organization that according to their mission defends and extends the digital rights of users at risk around the world.

In their blog post they said Malkia was a hero because, “As executive director of the Center for Media Justice and co-founder of the Media Action Grassroots Network, Malkia Amal Cyril’s work has focused much-needed attention on existing and potential discriminatory uses of surveillance technologies. This work has advanced grassroots opposition to these practices.”

Congratulatory Malkia and to learn more about the rest of the Heroes or Villains read here.