The End of Los Disturbios 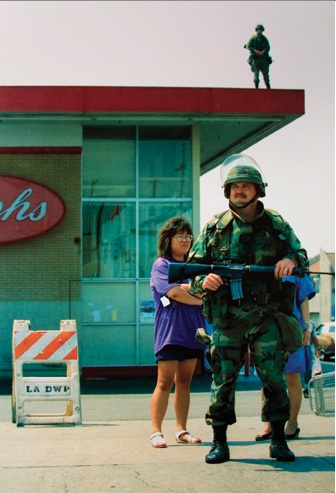 Twenty years ago today my mother finally felt it was safe enough to go food shopping.  For the past week south central Los Angeles had been literally engulfed in flames.  The trial that found four white officers in the Los Angeles Police Department (LAPD) not guilty of excessive force against Rodney King had pushed black and brown folks from L.A. to the edge.  I was only eight and have vague recollections of those six days in 1992, but what I remember the most about the riots, or as my mom called them “Los Disturbios”, was not how it started or the violence that followed.  It was when I felt it was finally over- when the National Guard set up shop, pointing rifles at me from the rooftop of Ralphs as my mother and I walked in to the store.

This past week there’s been several blogs and articles published on the 20-year anniversary of the L.A. riots.  I’d recommend reading Jeff Chang’s piece about  “Rap and the L.A. Riots” and  Colorlines  “Children of the L.A. Riots “.  I opted to go a different route and ask my mom what she remembers from los disturbios and here’s what she said:

What I remember the most about the L.A. riots are the signs people would put up that said, ‘Somos Latinos’ (We’re Latinos).  These signs got posted on businesses and even homes because the anger of the riots was being directed towards white people. What started it all was the Rodney King beating.  It was that video they kept showing of the police that kept hitting him and they wouldn’t let up.

It just angered you to watch it.  On TV they showed pictures of what he looked like after the beating and he couldn’t even open his eyes.  So when they let those police officers go it forced people to act.  It forced people to not stay quiet anymore about police abuses.

You don’t see the same types of beatings anymore.  Today it’s different.  Just the other day the police killed a Korean man.  There was video of it and you could clearly see that they killed him.  They said he was armed but they never found a weapon.  The police said they were just defending themselves.  I see more police killings now, beatings like before you just don’t see.

Even though the riots officially ended on May 4th 1992, the frustrations didn’t.  I definitely grew up having a healthy distrust of the police, a feeling further re-affirmed through several experiences of “driving while brown”.  My mom is right, los disturbios were a wake up call…a call that didn’t end on May 4th but that’s still relevant 20 years later.