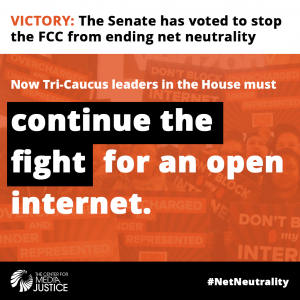 Racial justice advocates claimed a small but crucial victory today as the Senate voted in favor of the Congressional Review Act (CRA), taking an important step towards preserving a free and open internet for people of color and other vulnerable communities online. The Senate, with bipartisan support, voted 52-47 to pass the CRA following weeks of organizing and demands by civil rights groups — including the Center for Media Justice.

If the CRA passes in the House next, it would overturn the Federal Communications Commission’s decision to end Net Neutrality rules, which takes effect in June. Rep. Mike Doyle has introduced a CRA on the House side which currently has 160 sponsors and is supported by a majority of the members of the Congressional Black, Hispanic, Asian Pacific and Native American Caucuses.

Erin Shields, National Field Organizer for Internet Rights at the Center for Media Justice, has this to say:

“Communities of color have been at the forefront of the fight for net neutrality for years, and today’s vote was a direct result of that consensus building work centered on racial, economic, and media justice. While we are excited to see the bipartisan support in the Senate today — to keep the internet free and open — we can’t afford to rest. We’re looking to members of the Tri-Caucus now to rise to the moment and take up this civil rights fight in the House.

Without an open internet, people of color wouldn’t be able to organize across communities, borders, and even the world. In the Trump era, this freedom is more vital than it has ever been — and we must protect it.”