We’re excited to invite you to our upcoming Media Justice Salon, Big Data for Big Organizing: Reducing Harm and Advancing Justice Through Data, on March 14 from 1-2 PM EST!

Data is often presented as objective and unbiased, but it can negatively influence the public policy that 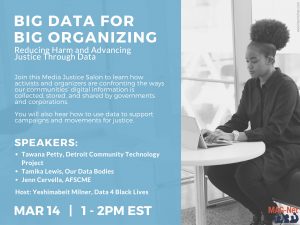 affects the lives of poor people and people of color.

Join this important discussion featuring activists and organizers confronting the ways our communities’ digital information is collected, stored, and shared by governments and corporations.

You’ll also learn how organizers can use data to support campaigns and movements for justice.

Don’t miss this opportunity to hear from data experts.

RSVP for FREE to join Big Data for Big Organizing!