(Re)Narrating The Nation at Netroots

Last week at Netroots Nation I participated in a panel, (Re)Narrating the Nation: Crafting Political Strategies and Poetic Stories for Powerful Effect, along with Doyle Canning from smartMeme, William Winters from Color of Change, and Roberto Lovato. 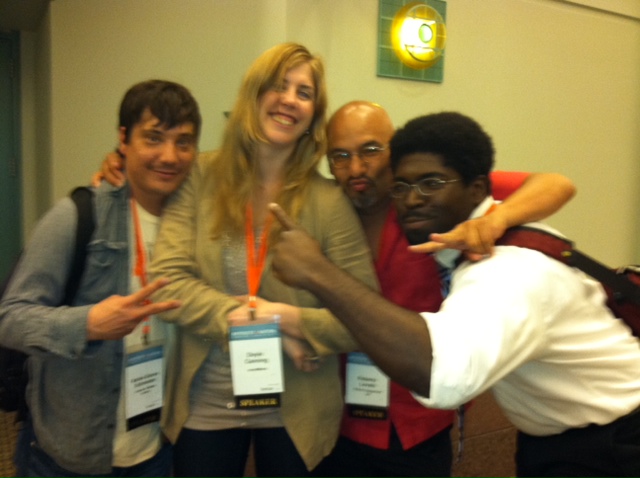 From the description: At a time when social and other media have become ubiquitous, combining organizational strategies with narrative strategies has quickly become mission critical to political organizing. This panel will explore the enormous potential of the current political and narrative moment by bringing together strategists and storytellers whose campaigns will allow us to discuss some of the best theory and practice in story-based political strategy.

I’m posting my prepared remarks along with a PDF of my slideshow. A very special thanks to ReelGrrls, whose story I tried to give justice.

Good afternoon Netroots Nation. I’m honored today to be here with this esteemed panel in front of such an important audience.

My name is Karlos Gauna Schmieder. My mom, Jeanne Gauna, was a founder and long time director of Southwest Organizing Project. I’m proud of my 10 years of work there as a youth, community, and ultimately, communications organizer there at SWOP. I currently work for Center for Media Justice. The Center for Media Justice is a national media strategy and action center building a powerful grassroots movement for media change and narrative power to end structural racism and eliminate poverty.

I don’t have to tell you all in this room that the media, and the world around us, is going through dramatic change and transition. You all have been at the forefront of this communications revolution, a revolution based on a basic need for human belonging and security. An interconnectedness born of necessity.

And as we transition to a new economy, a new communications era, and as we undergo dramatic climate change and an unprecedented demographic shift, our right to communicate with one another, and tell our own stories to imagine and organize for a better future has never been more important, nor more in jeopardy.

Today’s panel is about narrative, and it’s power to make change in our lives. You’ve heard from Doyle, Roberto and William talk about narrative’s power and it’s impact on meaning, culture and policy change. We understand that it’s more than about messages and frames and message discipline or how many media hits you get. It’s about changing the cultural conditions in which political, economic and social decisions are made.

I’m going to focus on re-framing media and telecommunications (changing the media rules) as a path to re-narrating the nation. I’m going to try a novel approach…and share a story. A story from ReelGrrls, a member of Media Action Grassroots Network, a network of over 100 media and social justice organizations and a key program at CMJ, as an example of successful network driven organizing, rapid reframing, and the power of networked movement to move nimbly to take an isolated incident to scale and change and shape the way peole think about media policy and media’s effect on our daily lives..

And, in the end, I’m going to ask you all to join us in a fight over some media rules that will affect everyone in this room’s ability to do what you do. 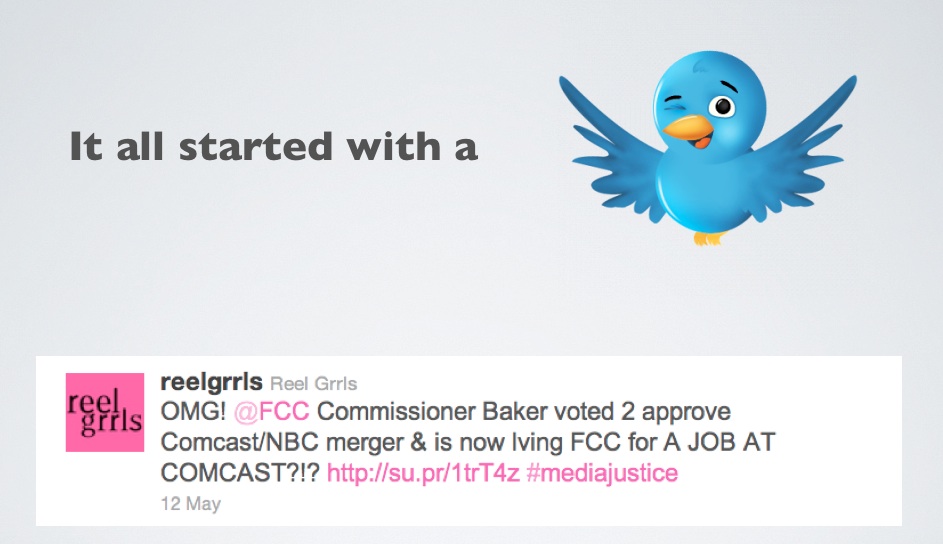 Then came the angry email…. 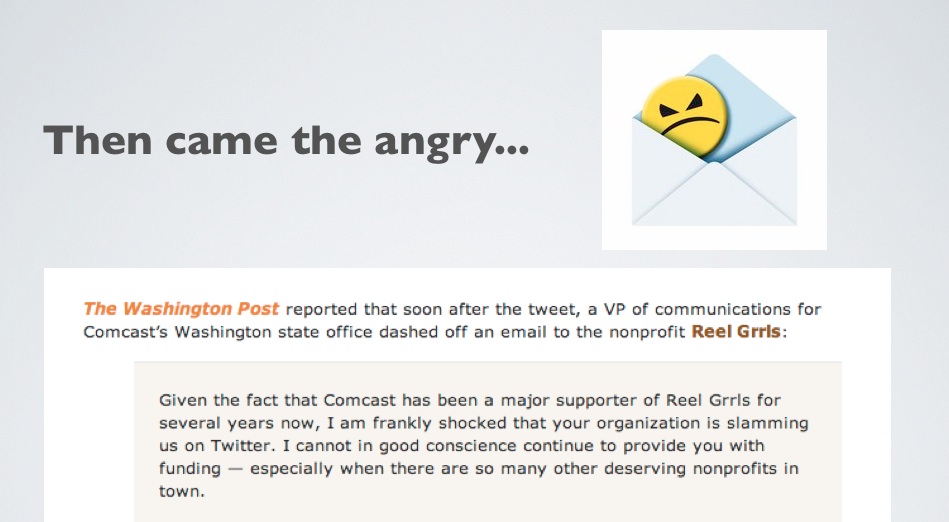 What transpired was more than just a David and goliath story… tough it was that.

It was also story of a corporate takeover of our communications systems, shrinking governments and public infrastructure, and a story that highlights an alternative the top-down big tent communications strategies that have been the downfall of progressive movements. We work from the model that uses a ripple effect audience strategy that builds messages, stories and frames from those most affected and those most organized and motivated to make change out to people who care about them, who care about their values and outward, rather than a top down message approach that focuses on trying to message to a mythical main stream America.

It was a story in which reelgrrls, an organization that uses video to unlock the power of young women, took on Comcast, an evil, horrible corporation.  A corporation which not only has the power to tell the story but also owns the communications system that mediates not only our most basic conversations but the national public conversation as well.

And in this case, it was also a corporation that made a critical early mistake. And it’s not that they threatened to pull a grant funding Reelgrrls summer program, and “broke up” with Reelgrrls by email.

It’s that they thought these young women were going to back down. 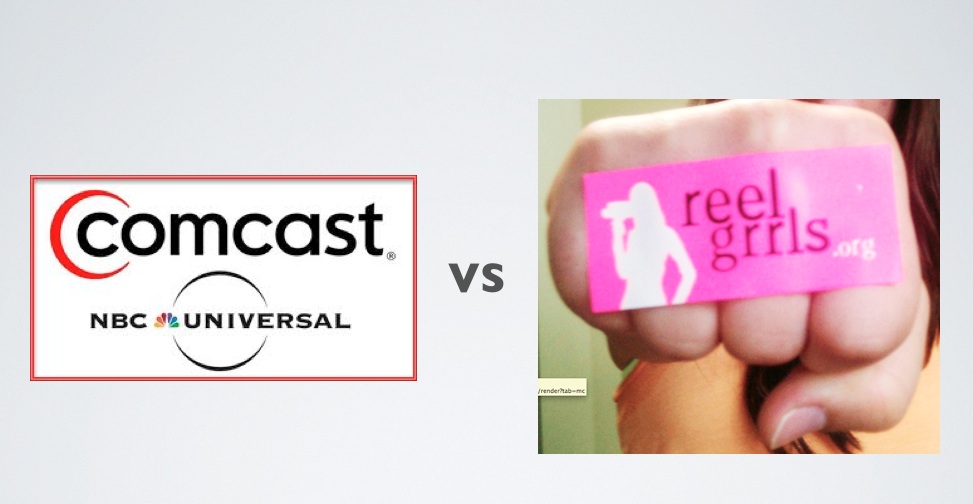 Apologies started coming from Comcast… Reelgrrls funding wasn’t in jeopardy they said, it was a rash response from a single employee, they said. Please, please, please take our money! 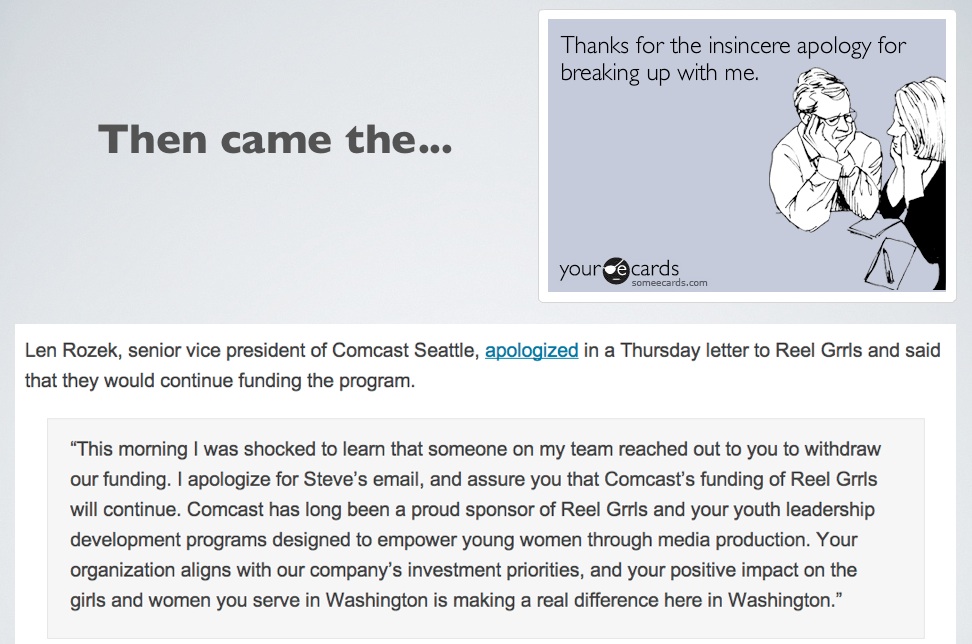 This story became water cooler/twitter material for tech and media reporters and in and outside the beltway. Blogs, tweets, FB posts and support came in from all over the country. Key tech reporters were having a conversation with their readers on twitter. 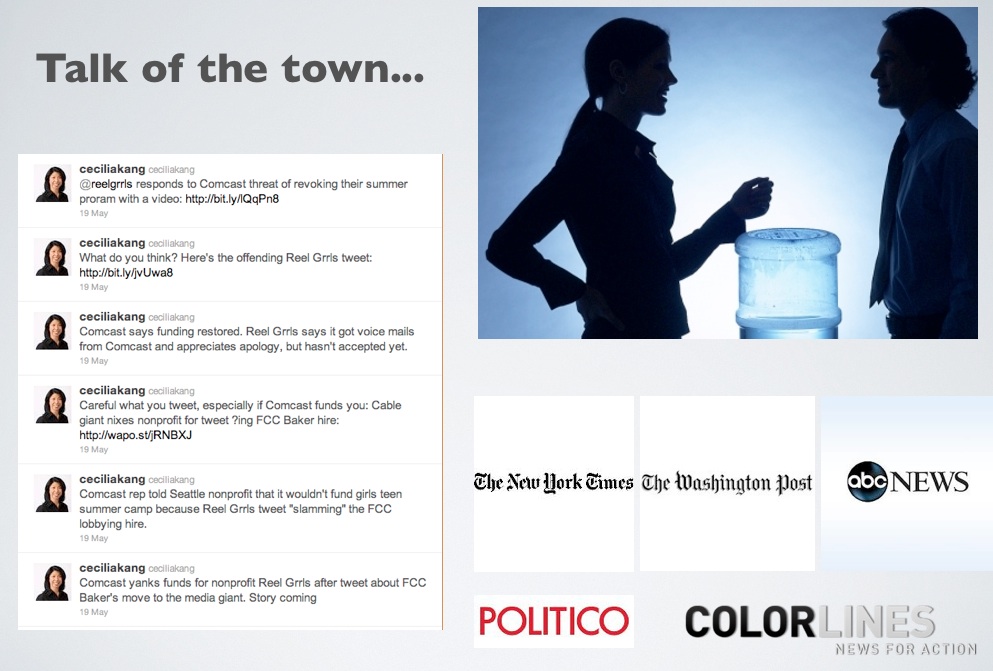 Another mistake Comcast made: they thought these young women were alone. But they were part of a network, a network fighting for communications rights for all. These groups gathered forces and started to fight back. 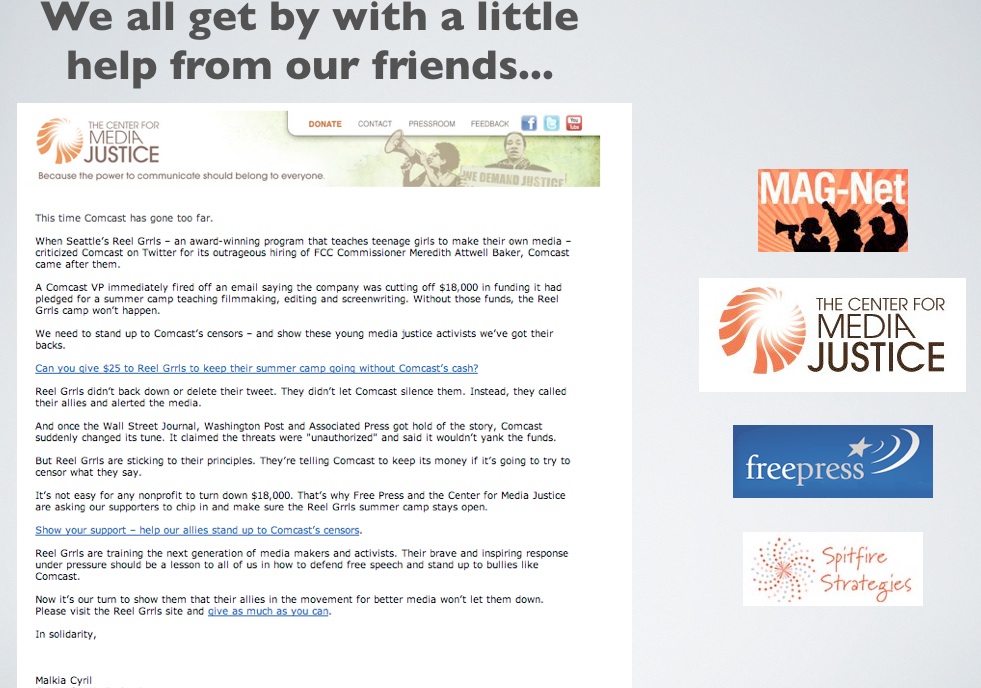 And @reelgrrls told Comcast thanks, but no thanks.

So what happened as a result?

You can see the slide, but I want to talk a little more about what was won.

What was won is greater than the money, it is the insertion of progressive voices and ideas into an existing debate that had previously excluded those voices.  It is the emerging concept that despite polls that say telecommunications companies are well liked, they can be held accountable and vast amounts of people want checks and balances on corporate power. Don’t believe the hype, the public is not happy with the corporate takeover of government and our communications systems. 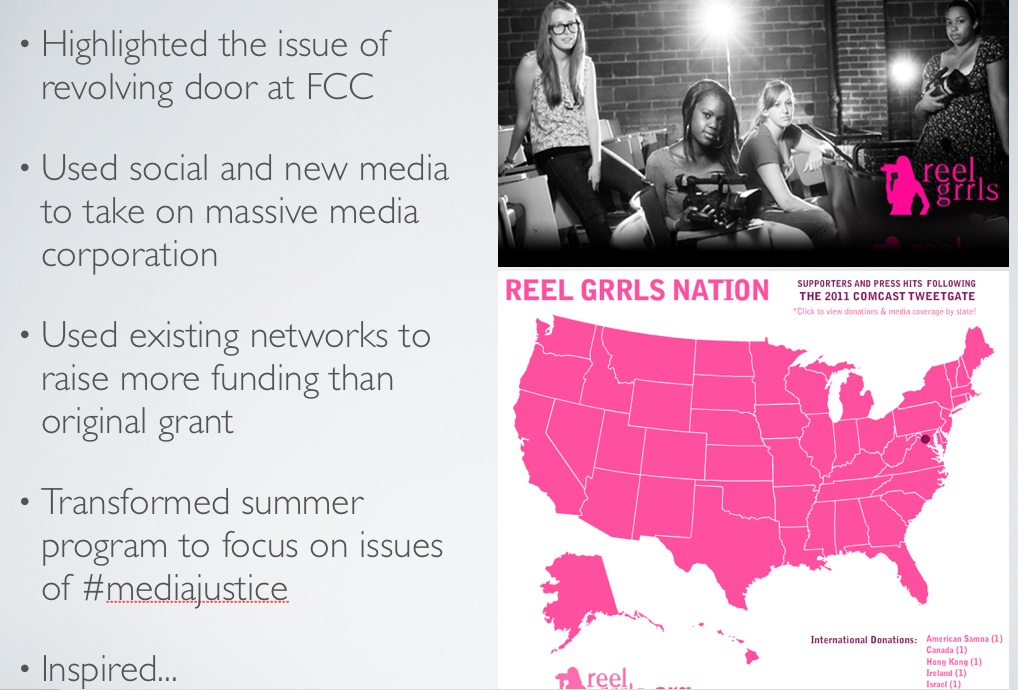 What was won was momentum to go on to our next fight. And here’s what I’m going to ask you to do. Has anyone  heard that ATT is proposing a takeover of TMOBILE? Do you want higher prices, less freedom and worse service? I didn’t think so. Please go to MagDashNetDotOrg and sign our petition to say no to the takeover.