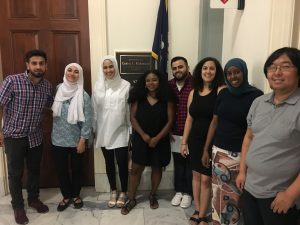 Last week in D.C., we helped organize a delegation of leading Muslim, Arab and South Asian American activists from around the country—assembled to demand an end to the high-tech surveillance and harassment of their communities. Members of the group spoke on a panel during a briefing with the Congressional Black Caucus, made impactful presentations at the Color of Surveillance Conference at Georgetown Law School, and visited the offices of elected officials on Capitol Hill.

Throughout the week, whether during the conference or while speaking directly to Congressional leaders, they powerfully argued for an end to racist programs like  “Countering Violent Extremism” and the FBI’s focus on “Black Identity Extremists.”

Check out some highlights from the week below!

Our #ColorOfSurveillance delegation just met w/ @OfficialCBC to share stories of surveillance from their Muslim communities and to highlight the racist connection between the “Countering Violent Extremism” program and the FBI’s monitoring of “Black Identity Extremists” pic.twitter.com/xMkQAEyEuN

“Will you publicly oppose #CVE?”

Our #ColorOfSurveillance delegates urge @KamalaHarris’s office to take stronger actions to genuinely hear the concerns of our communities. pic.twitter.com/6Qxykmqzb9

“It criminalizes people for their identity and hurts communities’ ability to say what their needs are.” Our #ColorOfSurveillance delegate, @Ramla_Sahid of @PANASanDiego, speaks to what she sees on the front lines of organizing against #CVE. pic.twitter.com/F6lDOmBmWv

“It’s ineffective and inherently biased.” Our #ColorofSurveillance delegates from @PANASanDiego, @stoplapdspying @MuslimJustice & more share their lived experiences with #CVE & advocate for the end of these harmful initiatives. pic.twitter.com/ilRmgocDoh

"We've lived with the trauma of surveillance and the mistrust and fear that it's built in our community." – @aberkawas of @takeonhate, part of our #ColorofSurveillance delegation that met with Congressional offices today pic.twitter.com/KX0jmlLo6q

In the eyes of #CVE programs, young Muslims who organize, speak out against injustice & carry out any other actions to get free are on a path to radicalism. #ColorOfSurveillance pic.twitter.com/mugN7lvO7F

"The Somali community in San Diego, which sits at the crossroad of multiple biases, has witnessed firsthand what discriminatory high-tech monitoring can lead to." – @ramla_sahid of @PANASanDiego, and @stevenrenderos, in @Colorlines https://t.co/DzXg53sxgr #ColorOfSurveillance

For more, view our photo album from the week’s activities on Facebook.