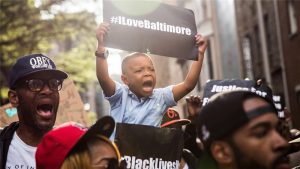 What I remember most viscerally is the fear.

It had been almost four hours, and I couldn’t get the handcuffs off. The lights in the underground subway station were flickering, and I had an almost phobic fear of the dark. The white cop who had cuffed me to the gate inside the subway station was gone, and I didn’t know when he was coming back. He did return, sometime later, letting me go with a lecture and a hefty fine I had no way of paying. I had peed on myself. I was 11 years old.

It wasn’t the first time I had been illegally detained by a police officer. In fact, in the US, arbitrary detention is one of the most common ways for police officers to initiate contact with black people of all ages. The overbroad nature of the law, and the subjectivity of those who enforce it, supports judgment calls by police, despite the fact that they consistently choose to be more brutal than is necessary in the act of subduing the black body.

I think of that night often, especially these days, when the photograph of Tamir Rice, the 12-year-old child gunned down by police in Cleveland, Ohio, stares back at me. I think that, no matter how young we are, we are perceived to be something other than children.

Perhaps the perpetual dehumanisation of those formerly enslaved by those privileged by slavery is the only possible outcome of a nation that built its wealth on chattel slavery – especially if, as in the United States, black labour is still violently extracted for pennies on the dollar – in domestic work, fast food chains, restaurants, big box stores, and elsewhere.

I think of that night because it is one more example of how being black and breathing in America is a victory unto itself.

Once a Panther, always a Panther … even when you’re just a cub