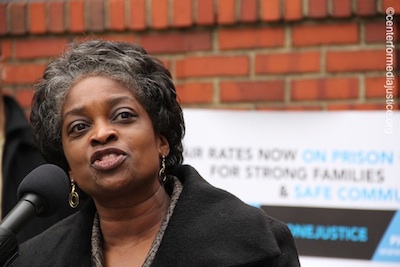 Washington DC- Today, at a rally for fair prison phone rates, FCC Commissioner Mignon Clyburn announced that Chairman Genachowski has begun circulating a further notice of proposed rulemaking for a vote.  This marked the first step forward in a ten- year effort to make the price of inter-state calls from prison affordable.

The midday rally, sponsored by the Campaign for Prison Phone Justice, brought together more than 150 people to call on the Federal Communications Commission to end the high cost of calls from prison by establishing a cap.  Holding signs and singing, the crowd was visibly moved by the words of Commissioner Clyburn, “I have been working with Chairman Genachowski, my fellow Commissioners, and our wonderful staff, to grant the Wright Petition, and issue a Notice of Proposed Rulemaking that will lead to lower interstate long distance rates from correctional facilities.”

Offering a special thank you to campaign leaders including the Media Action Grassroots Network, Prison Legal News and Working Narratives, Commissioner Clyburn remarked that a notice isn’t the end of the process, but is a critical first step.

“The Campaign for Prison Phone Justice is incredibly excited that the FCC has taken notice of the tremendous bi-partisan support for fair phone rates on calls from prison,“ said Steven Renderos, National Organizer at the Media Action Grassroots Network. “Commissioner Clyburn’s announcement is an incredible beginning.  After 10 years of waiting, we hope the Commission keeps moving forward to finalize these rules.  When families are forced to choose between buying groceries and paying an expensive phone bill, every minute counts.”

Campaign spokespeople were joined by Timothy Robinson, Legislative Director for the Honorable Bobby Rush; Participant Media’s Social Action Campaign representing the film, Middle of Nowhere; Prison Policy Initiative and Sum of Us; faith leaders like Pastor Mark Ehrlichmann who ministers to deaf and hard of hearing inmates, United Church of Christ President Reverend Geoffrey Black, and former prison chaplain Michael Bryant; as well as by the families of prisoners.

The next step is for the FCC Commissioners to vote on the text of a Further Notice of proposed Rulemaking.