Cultural Relief: Marking the One Month Anniversary of Hurricane Sandy

“The Hurricane only shed a harsh light on what was going on before the storm. Perhaps this awareness will bring more energy to the movement to bring about equality and equity to those who are in need, or cut off from larger society.”

At our Center for Media Justice (CMJ)’s New York City office, I have the pleasure of sharing an office along side members of Families United for Racial and Economic Equality (FUREE), who have been in the frontlines tirelessly organizing low-income public housing residents devastated by Hurricane Sandy.  As we know it’s often low-income, immigrant and communities of color (who are already most impacted by racism and poverty) that are also the most neglected during disasters and difficult times like this one we’re faced with.  FUREE had been working with residents of Gowanus Housing Projects in Brooklyn providing food and supplies to those still without power – which meant no elevators, water pumps, or heat. Many residents lost their benefits altogether or didn’t get the information they needed to provide for emergency supports.

As we reflect on the one month anniversary of the Hurricane Sandy, we must applaud the amount of mutual aid, volunteering, and organizing and cultural work being done on small and large scales.  It’s been inspiring and heartening to see community-based organizations, Occupy Sandy, and individuals step up during a time of great turmoil and need, setting up relief centers and organizing aid immediately following the storm. This collective spirit and action was a stark contrast to government agencies like the Federal Emergency Management Agency (FEMA) who were slow to respond to communities that were most immediately impacted by the storm.

Many coastal and low-lying areas of Brooklyn, Staten Island, Lower Manhattan and Queens were pounded with destruction and devastation.  Millions in New York and New Jersey are still without power, even a month after the storm has hit. Communities will be recovering and reeling from the largest hurricane to hit the North East in recorded history for years to come.  The death toll stands at 97 in and around New York City with an estimated $33 billion in damages in the state alone.

As we enter the one month anniversary since Super Storm Sandy struck, I’ve been moved and impressed by the creative and cultural organizing work that our New York City Media Action Grassroots Network (MAG-Net) members and partners have been engaged in these last few weeks.

Millions of people have been affected and for many their lives and communities have been altered forever.  They have lost their homes, seen their belongings washed away, and uprooted from their neighborhoods.  What are the ways that we as individuals and as communities can collectively heal from this trauma that will be felt for many years to come?

The Red Hook Initiative, Arts & Democracy Project, and Housing is a Human Right have been providing a space for cultural and artistic respite in relief centers, setting up mesh networks so residents can have Internet access, and providing a media platform for people to tell their own stories of disaster and recovery.  Here are just a few examples of how cultural organizing groups provided cultural relief during one of the largest disasters of our time.

From day one after the storm, the Red Hook Initiative, a NYC MAG-Net, member was there to respond.  The Red Hook community in Brooklyn was hit with massive flooding and damages.  Public housing residents went with out heat, electricity and hot water for weeks. Anthony Schloss, Media Programs Coordinator explains”

“What haven’t we done? After the storm passed, a co-worker went to check on the damage to Red Hook Initiative (RHI). As it turned out, RHI was one of the few buildings in our neighborhood that was not damaged and had power and heat. Almost immediately RHI organized hot meals, supply distribution, a medical clinic, homebound medical service and food, legal aid, cell phone charging and internet access, and warmth.

As the weeks wore on we began setting up systems and partnerships with other organizations and other places (churches, mostly) to move these relief services to different sites within the neighborhood. By the time city agencies showed up, many of the needs of the community were already being addressed.”

It’s important to underscore that RHI was a critical hub connecting residents, meeting their essential needs but also providing Internet access to the neighborhood through their adhoc wireless mesh network. For the last year, RHI has been working with the Open Technology Institute at the New America Foundation to create a low cost neighborhood WIFI network- a mesh network for Red Hook. However, they have been stymied by various entities and have not being able to legally extend their internet service beyond their building, because of their service contract from Verizon. Anthony says:

“But the storm made it so clear how media access and digital justice is an important part of social justice and equity. Had the network been up, we could have gotten needed information to the residents of the neighborhood. As it was, the WIFI hotspot that we had extended into the streets around RHI was overloaded by users.  Communication is necessary for all populations, and low income and marginalized communities are no different. Except that they generally have less choice, access or applications than other more fortunate groups.”

The problems of poverty and economic injustice in the Red Hook neighborhood remain, and the storm has put a shining bright light on the realities that many of these already neglected communities have been dealing with for decades. As Anthony puts it:

“We will of course be helping out everyone affected in the neighborhood. RHI has became a popular organization that attracted many volunteers and donations, so we will use that to help out wherever we can–but our primary focus is on the residents of the Red Hook Houses. I am not sure of the long term affects-lots of attention was given to the challenges those who live in Red Hook face, but when the media story shifts and city services decide to focus on the next priority, I cannot say where we will be at that time. I think long term effects will likely be economic, which will affect all strata of the population.” 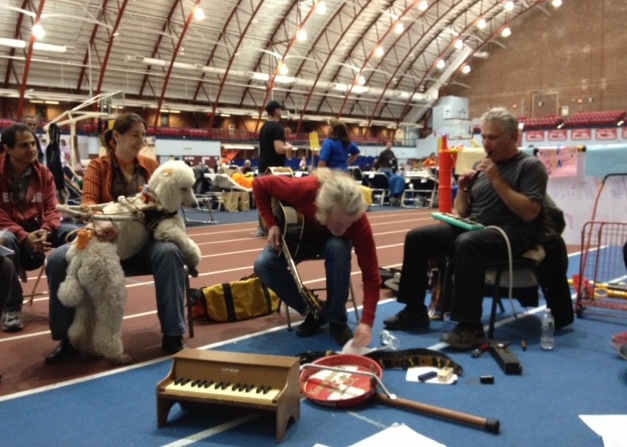 Caron Atlas of The Arts & Democracy Project (A&D Project), another MAG-Net member was contacted by local city councilmember, Brad Lander right after the storm to organize cultural and wellness activities at the an evaluation shelter, the Park Slope Armory with over 300 elderly and special needs evacuees housed there.  On a recent call hosted by the A&D Project, Caron talks about the activities she and other cultural workers organized at the shelter:

“This ended up including arts and culture, exercise, massage, knitting, religious services, a Veterans Day commemoration, therapy dogs, and stress relief. In essence the Wellness Center we created became the living room of the Armory – a place people could come to talk, create, and build community. Artists from all over the city, and from the neighborhood, volunteered to perform and hold workshops. We had performers from Broadway and string quartets from Carnegie Hall; jazz ensembles, dancers, film screenings; and writing, storytelling, and artmaking workshops. Everyday we sang together.”

Although that particular shelter in the armory closed recently the work hasn’t’ stopped.  There are still hundreds of people who can’t return to their assisted living building so they have moved to another temporary space. Cultural workers and artists in the Arts & Democracy Project are bringing programs there as well to help ease the transition, and they plan to follow up the evacuees when they return home to the Rockaways, a neighborhood in Queens devastated by Hurricane Sandy.

Caron reflects on the role of arts and culture during this time of disaster, “We are codifying the model of our Wellness Center and developing the idea of an “arts and wellness recovery corp” of trained artists and cultural organizers to support it.  I’ve always known that arts and culture had the power to heal, but this direct experience proved to me how extraordinary they could be in a disaster. Above all, our work helped return peoples’ dignity and respect.”

In the long term the Arts and Democracy Project is working proactively to ensure that these cultural and wellness programs are built into disaster planning and are considered vital aspects of evacuation shelters and longer-term recovery programs. As Caron eloquently puts it, “People want to step forward and to help, and when they do, it makes a difference. We are connected in a ways that we weren’t connected before. This engagement and connection should be embraced by our policies and practices.”

Close partners of the Arts & Democracy Project are Michael Premo and Rachel Falcone, co-directors of Housing is Human Right who have been actively organizing with Occupy Wall Street since it’s inception.  They also played major roles in getting Occupy Sandy off the ground. Occupy Wall Street networks and relationships with different social justice movements were formed over a year ago.  Those networks are still alive and going strong, so when Sandy hit, organizers and volunteers were able to turn 25 sites (such as organizations, churches, store fronts and others spaces) into recovery centers in New York City, some of those hubs were in evacuation zones and in hard hit places like Staten Island.

Early on, right after the storm hit, everyday people were taking photos and capturing video and audio with their cameras and cellphones.  It became apparent that people wanted to build their own narrative and stories and talk about how they were directly impacted by the Hurricane.  And in many cases residents and community members weren’t seeing their stories being reflected in the mainstream, so this was a way to do that.

Even personally as a social media consumer, I was getting faster and more timely information about the direct impact on local communities from Facebook and twitter than I did from any major news outlet.

Recently, Housing is a Human Right launched Sandy StoryLine, in collaboration with the MIT Center for Civic Media, in partnership with Cowbird, Interoccupy.net, Occupied Stories and a growing number of media makers, storytellers and people like you.  Sandy StoryLine is a participatory documentary about Hurricane Sandy and efforts to recover and rebuild neighborhoods.

All one needs to participate is a cellphone or telephone.  The storyteller simply can send a text or picture message to an email address or call a 888 number and record their testimony and listen to other people’s stories.  It’s important to note that Internet access is not necessary to participate in this unique storytelling project. As they state on their website, “We hope this will be first in a series like this on a variety of issues that allow participation regardless of broadband access.” 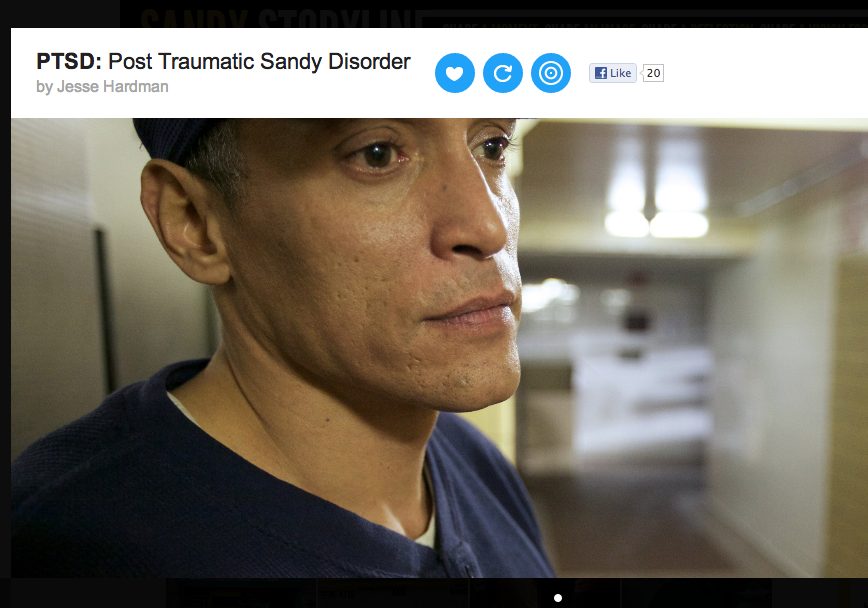 Most of the stories on their website have been uploaded by residents in the Far Rockaways, parts of Brooklyn and Staten Island who have been the most affected by this storm. One storyteller, Jesse Hardman titles his digital story “Post Traumatic Sandy Disorder”. Sandy StoryLine will also be setting up storytelling workshops that can help advance larger organizing goals, youth empowerment and leadership development.

These are just a few examples, out of dozens if not hundreds of examples, of ways people are supporting one another through artistic and cultural relief and mutual aid.  It’s important that people feel a part of a larger community that is healing together, and are not isolated and left coping with rebuilding their lives on their own. It’s vital that we preserve and share our stories.

These projects and efforts are living examples of how media, arts and culture can impact people’s lives and help us heal and rebuild from this massive disaster that has affected millions of us.