From Cultural Moment to Culture Movement 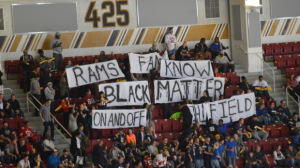 I recently traveled to St. Louis to represent the Media Action Grassroots Network during the Ferguson October Weekend of Resistance.  It was amazing.

This was my second trip back to Ferguson. The first time I went was in August, a week after unarmed black teenager Michael Brown was shot dead by white police officer Darren Wilson. After experiencing the initial shock and trauma during my first visit (also recognizing the privilege that comes with my ability to leave), I was amazed by the level of organization and solidarity that had grown since then.

I was proud to see the thousands of people that were mobilized to come to Ferguson for a week of protest and civil disobedience. When I arrived, I immediately went to the march at the Clayton police department. Despite the rain, community members, out-of-towners, and local leaders began to chant and prepare folks for the weekend to come.

Later that evening, as with every evening, we marched to the Ferguson police department. Banners and street performers, music and signs that read “Demilitarize Police” and “Justice for Mike Brown” filled the streets with a visible culture of resistance. What I found most interesting during this second visit to Ferguson was the level creativity and the use of art and music that complemented the clear collective rage expressed by the community. One extraordinary visual that demonstrated the Black lives taken by state sanctioned violence was a banner illustrating all of the beautiful Black bodies killed by police. The banner was carried, along with a coffin, for all Ferguson police officers to see.

Saturday contained a series of events — rallies and marches, confrontations and sit-ins. The day began with a march in St. Louis before kicking off the Justice for All rally across from the very place where a St. Louis Circuit Court voted to grant Dred Scott and his wife, illegally enslaved, their freedom. As the fountain behind us eerily spewed water that had been dyed blood red, I reflected on all of the blood lost on this ground through slavery, Jim Crow, and ongoing police violence. On that hallowed ground, rally organizers announced that over 3,000 people had come to St. Louis to stand in solidarity with the Ferguson community. It was powerful. Leaders from the Dream Defenders, the Palestinian contingent, labor, Ohio Student Association, Communities United for Police Reform, and more took the stage to connect the local struggle with struggles happening all across America.

That evening began the second night of protests. Again, we marched our way to the Ferguson police department to not only demand justice for Mike Brown but for all of the Black women and men who are assaulted, killed, and harassed by the state every day. A new local youth group called Lost Voices helped to build community at the police station by mixing rap and hip hop with the chants that still continue to sing in my head, “Turn up, don’t turn down, we do this for Mike Brown!”

As the night grew darker, a contingent of protesters were led to the Shaw neighborhood, to protest the police murder of another Black teenager, Vonderrit Myers Jr., 18, shot by police just a few days prior. Keeping out-of-towners in line, the local organizers pulled off a successful sit-in demonstration outside of a Shaw Quick-Trip where 17 folks were arrested. One of the most fascinating elements was how these actions were communicated using digital technologies.

Once I arrived, I was contacted by the Rachel Maddow Show to live stream what I was seeing while in action. During 1960’s, at the peak of resistance civil rights activists communicated over written correspondence like letters and newspapers. During the actions of Ferguson October, organizers used Twitter and Facebook to communicate about where to meet, what time, and what to bring. These digital platforms allowed for instant, mass distribution, which enabled rapid action and pivots when needed. While the fight for an open Internet isn’t the primary issue for Black freedom movements, its clear that it is because of an open and non-discriminatory Internet that Black people in the United States can use social media at unprecedented levels to bypass mainstream media to communicate and connect folks with action on the ground as soon as it happens.

The energy of this local movement was visceral. This movement remains one that not only provides an entry point into the work of justice, but also highlights the role culture plays in organizing for justice and Black liberation today. I have previously argued that it will be cultural strategies that will ultimately shift the relational dynamics between community and police. The question it raises, is how to provide the tools necessary for movement moments to create new cultural conditions that change power dynamics? Ferguson October, and the national movement it helped spark, is not only a resistance to the brutal power of the police, but a rebirth of a community with new cultural standards and conditions.

More than anything, I was proud to be part of it.