From Brooklyn, to Philly, to D.C.: A Day in the Fight for Net Neutrality

On an unseasonably hot September day in Washington D.C., our group of grassroots activists have been jostling through several metal detectors, carpeted cafeterias, and marble steps from one congressional building to the next. By late afternoon our physical and cell phone batteries are running low. I think to myself, as we walk to our last meeting, New Yorkers aren’t used to roughing it. 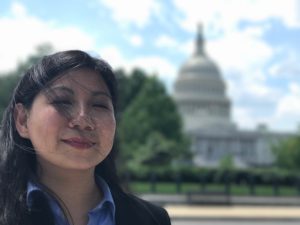 It was not the physical act of going from point A to point B, but the real challenge of the day was the responsibility of articulating why a free and open web is critical to people of color and immigrant communities in the United States and to decision-makers who are often far away from the realities we see every day as grassroots activists and technologists. Earlier this month MAG-Net invited delegates to a national net neutrality hill event with other delegates from 40 other states and the District of Columbia. I was excited to learn we were to meet with several members of Congress representing New York City with strong ties to immigrant communities. Even though I no longer live in New York, it is the place the place I keep closest to my heart and I will always consider myself a native.

I met up with fellow MAG-Net members Alfredo and Antoine in DC. Alfredo of MayFirst/PeopleLink is a technologist and has been a long time advocate of net neutrality. Antoine of PhillyCam comes from independent media and education. Even though each of us comes to the table from different places and experiences, our group’s familiarity with Brooklyn and independent media enabled us to expand our vocabulary beyond phrases like net neutrality, lanes, broadband, and fiber optics – terminology that could become overly technical and abstract. I could draw from my memories of overlapping bodegas and other immigrant owned businesses, along the crisscrossing streets of Flatbush, reliance on social media and websites to attract customers into conversations with congressional staff members. I also talked about the plethora of local newspapers and media from different ethnic residents written in languages other than English published on the Internet for readers around the United States and abroad.

Alfredo talked about using digital advocacy to hold police accountable in his neighborhood, and pressed the issue of how advocacy as we know it today would no longer exist without net neutrality. Antoine talked about his work with independent media and education in Philadelphia. We wanted to emphasize that without an open web, all issues, including healthcare, education and the environment are in jeopardy of being shut out of political debates. Grassroots advocates around the U.S. are coordinating, collaborating, and expressing their political views online.

Our delegation was small, but focused. Each of us came to this issue from a different place, but was able to find common ground because we have the shared goal of defending freedom of speech and freedom of association on the web as an invaluable tool for people of color and immigrants. The Internet is where the same constitutional rights should exist online as offline and where stories and creativity can and should be featured without relying on mainstream media outlets.

1) Meeting other MAG-Net delegates from around the country and learning more about their work from back home.

2) As MAG-Net members, our lived experiences fill in the gap between abstract or technical terminology with tangible experiences. Technological jargon like stingray and net neutrality are retold with narratives of how local police surveillance and digital access impact our neighborhoods.

3) We often bring a racial analysis that is valuable, a perspective unique from traditional lobbyists in DC.

My work towards social change has been demonstrated from canvassing or through my work as a data analyst. I don’t often get the opportunity to share my experiences with elected officials and their staff in person. Center for Media Justice staff provide critical support for this experience by preparing us with background information and talking points for face-to-face discussions for meetings with Congressional Members and their staff. I will always carry my experience as an immigrant from Brooklyn no matter where I am in the world, but I also feel it is my responsibility to use these experiences to inform policy decisions when possible.

For more on our day in D.C. for Net Neutrality, check out CMJ’s Erin Shields’ interview on Philly Cam’s People Power Lunch Hour on 106.5 FM!