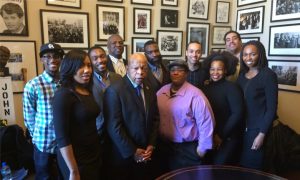 It was 1987, and my 13-year-old interaction with mainstream news and entertainment media was a martial one. I felt it as a daily pain, the way each and every criminalizing descriptor peeled back my dignity to the raw shame of being found perpetually guilty. Like many Black children, I lived with the cognitive dissonance of being either stereotype or subject, constantly spoken for or about by media gatekeepers. The saturation of anti-Black media stereotypes didn’t make me feel invisible.  On the contrary, I felt constantly watched.

When I helped launch the latest iteration of a movement for media rights, access and representation, it was driven by a profound need to transform the cultural terrain Black lives and Black movements are forced to navigate. After years of organizing with incremental success, I got my wish.

The astounding cadre of proud, hopeful, and angry Black activists that erupted in every U.S city in the wake of Officer Darren Wilson’s fatal attack on Black teenager Michael Brown last August redeemed me. Out of a moment of righteous rebellion, an effective national social movement for Black lives is re-framing the context for Black life, in action– and they’re using the emergent technology of the open Internet to do it.