Are we taking back the American Dream? Or still living the nightmare?

“The Tea Party got the memo.  We didn’t.  How can 15% of the public opinion shape the nation’s political landscape?  What about [the rest] of us?”

-Van Jones during his closing plenary at the 2011 Take Back the American Dream Conference in Washington, D.C. 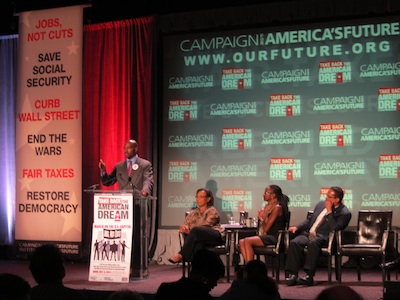 I am a self-admitted skeptic when it comes to electoral machine politics, even when it’s a gathering of the most “progressive” wing of the Democratic Party.  I think that we all can admit that we’ve been mostly disappointed by President Obama’s policies.

Especially disappointing have been his actions of bailing out Wall Street during the economic recession, the escalation of troops in Afghanistan and other military actions, and the increase in the detention and deportation of undocumented immigrants under his watch.  I can’t say that I am surprised since after all he is the President of this great capitalist system of ours.  So when I went to the Take Back the Dream conference in Washington D.C. two weeks ago I was wondering what canned slogans and water-downed demands I would hear.

The conference is organized by the Campaign for American’s Future and co-chaired by Van Jones, a respected activist with a long history of fighting for social, economic and racial justice.  Though he was a familiar name amongst social justice advocates, the world was introduced to him when he was appointed the green jobs advisor in the Obama White House in 2009.  He has largely focused on “green-collar jobs” and how cities should implement job-creating climate solutions. He is a also co-founder of the Ella Baker Center for Human Rights, Color of Change, and Green For All.

I highly admire and respect Van Jones’ work and I want so much to believe that the Democratic party can be radically reformed, which is why I attended the conference.  Also in attendance were groups like Communication Workers of America, New Organizing Institute, The League of Young Voters, Move On, and other groups who have committed to “taking back the American Dream”, to restore justice and liberty into a system that has largely benefited the super wealthy 1% in this country.  But then again what are we “restoring”? and for who?  For the majority of communities of color, migrants, incarcerated people, indigenous folks and poor people the system never worked for us, we never experienced justice and liberty in America in the first place.  However, I was pleasantly surprised to see the full range of activists and organizers – mostly self-identified progressives who were left of the current Democratic Party.

Simultaneously, the Occupy Wall Street movement was going strong and entering it’s third week, no one could deny the grassroots power of a new generation of young folks, working people, and people of color that were waking up and speaking out.  Participants in every panel I attended had to acknowledge this growing movement which was not only sweeping the country, but the world.  The messages of the conference were in a nutshell – “stop the budget cuts”, “maintain Medicaid”, and “tax the rich”.

I attended a messaging and framing workshop for activists and organizers.   Trainers from Media Matters were offering interview tips for folks being interviewed by mainstream press.  There was a strong emphasis on framing messages that would speak or appeal to the middle – that is the white middle class.   Where then, I wonder, would the hundreds of people I work with through the Media Action Grassroots Network fit in?  When and how do we push the socio-economic, racial, and media justice issues that communities of color, immigrants, rural, working, and poor people care about?  With the spreading groundswell of anger at Wall Street and the presidential elections next year, this is the best time to push the envelope.  We have an opening, a platform to raise these issues, to put out a vision for a just system that represents the needs of the 99%.

Then there was the conversation I had with an organizer of Communication Workers of America (CWA).  The organizer I spoke with requested that our MAG-Net members leaflet at Verizon stores to put pressure on the telco, who is trying to take away Verizon workers’ bargaining power.  Having worked extensively on immigrant workers rights, I know firsthand the importance of having representation and mobilization power in the work place.  But as organizer of MAG-Net, I also know the importance of preserving Internet freedom and telecommunications power, both for the purposes of community organizing and for the protection of consumers.  Though CWA has stood with MAG-Net on a number of media justice issues, they are unfortunately in favor of the AT&T  merger- a merger that will lead to massive job losses for non-union workers.

In the course of our conversation, I couldn’t help but think about how the telecommunication corporations, more specifically AT&T, has managed to pit labor against consumers.  The truth is, it is not one or the other.  Many union workers are experiencing tremendous push back and their collective bargaining power is being threatened all throughout this country.  On the other hand, we know that most of us (unionized or not) are also consumers who can’t afford to pay an additional $15-$50 a month for their cell phone (which is likely to occur if AT&T swallows T-Mobile), despite the fact that cell phones have become an integral part of everyday life. Workers are consumers and consumers are workers.  We have much more in common than differences.

Finally it came full circle for me when I heard Biko Baker of the League of Young Voters and Deven Anderson of Black Youth Vote speak during the “Voter Suppression and the 2012 Election: The Civil Rights Movement to Take Back the Right to Vote” panel.  They talked about the draconian State Voter Photo ID laws that have already passed in several various States, mainly in the Midwest and South.  These laws that will have an adverse effect on Black, Latino and immigrant communities.  Many present at the conference referred to this voter disenfranchisement law as Jim Crow-esque.

Attending this conference was a unique experience and reminds me that things are not so simple, not even the “progressives” aiming to reform the Democratic Party and working to “restore” democracy.  As Van Jones closed the conference he reminded us that this is a unique historical moment, with the presidential election session kicking off next year and a grassroots, bottom-up Occupy Movement that shows no signs of slowing down.   Now is the time to shake things up and demand change.  The 99% are rising up.  This is just the beginning.  We are not taking back the democracy we never had, but rather building it from the ground up according to the people’s needs.