Thousands turned out in D.C. and across the country on October 26th for the Stop Watching Us Rally to End Mass Surveillance.  Though the spotlight is mostly on the National Security Agency’s domestic spying program, telecommunications companies are working hand in hand with the government – and it’s marginalized communities that are paying a hefty price.

Check out FIVE TERRIFYING TRUTHS ABOUT TELECOM COMPANIES, and why you should be scared too. 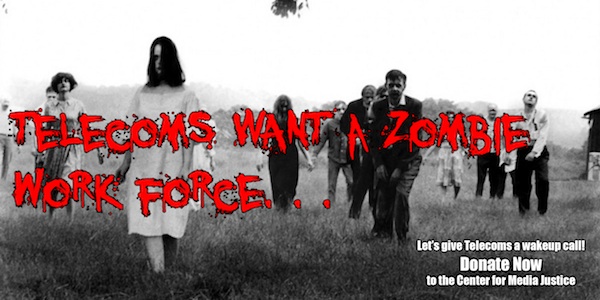 Comcast, Verizon and Time Warner Cable are just some of the telecommunications companies underwriting the American Legislative Exchange Council (ALEC).  Through ALEC, Telecom companies are funding lobbyists pushing laws that lead to deregulation, voter suppression, minimal environmental protections and “Stand Your Ground” legislation.  And as if that isn’t enough – they’re leading the charge in “Right to Work” Union Busting efforts and blocking sick days legislation!  Through our communications training and rapid action local-to-national campaigns, we’re working to shift the narrative in the press and give Telecom companies a big wake up call. 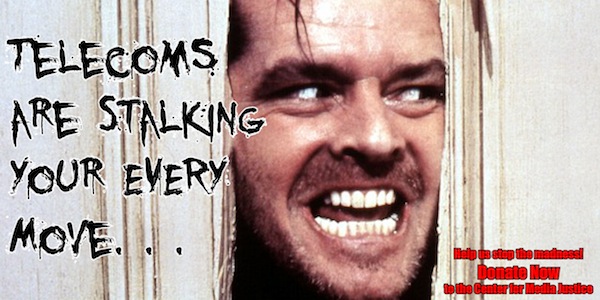 Overzealous government surveillance isn’t new – there’s a long history of surveilling and targeting racial and social justice movements.  In today’s world it’s even easier – with companies like Google and Facebook profiting off of your private information by selling it the government and companies.  With the launch of SAFER (the Safe Activism, Free Expression Roundtable) in the upcoming year, and our work with the Stop Watching Us Coalition, we’re trying to put an end to the madness once and for all. 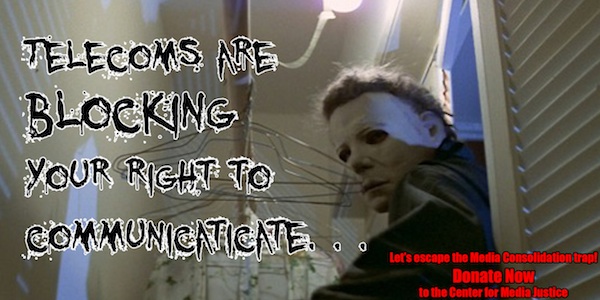 One thing that scares Telecom companies is the thought that you could have your own media to amplify the stories and voices of your community.  Right now 90% of all media we consume is owned by 6 Telecom companies – including Disney, Time Warner (again) and News-Corp. And if it were up to them it’d be even less, that’s why they spend a ton of money trying to undermine efforts to get the Federal Communications Commission to fulfill the promise of the Telecommunications Act.  Right now we’re working with organizations like Prometheus to help ensure that grassroots organizations are able to get Lo Power FM licenses to run local radio stations that uplift our communities. And through our Community Media Cohorts, we’re working on escaping media consolidation and ensuring a more diversified media!

AT&T and Comcast spent a combined total of over $16.5 million in 2012 in campaign donations and lobbying efforts.  No wonder the U.S. Supreme Court thinks corporations are people too.  There’s a serious conflict of interest when elected and appointed government officials are being funded by corporations.That’s why through Knowledge Exchange and other collaboration spaces we continue to ramp up efforts in D.C. to make sure that regulators like the FCC remember that they’re here to represent people, not help corporations get a return on their investments. 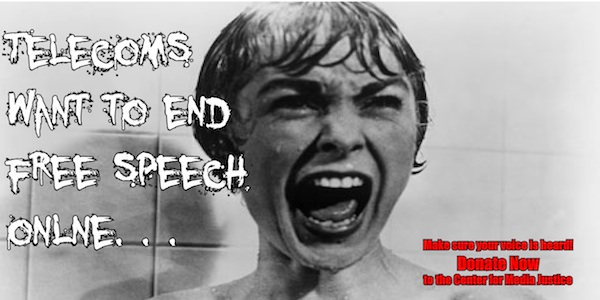 Right now Verizon is facing off against the FCC in the Supreme Court on the issue of Net Neutrality and the scope of the regulatory body’s authority over the Internet.  The outcome of the trial could determine what content you can access online and whether you have the freedom to organize for your community.  The impact could be particularly devastating for communities of color.  That’s why we started Voices for Internet Freedom in partnership with Free Press – so that everyone, everywhere, has access to a fast, affordable and open Internet.

Join in online and tell us how are telecom companies and these terrifying truths  are impacting your community. Follow #stopwatchingus #mediajustice &  #terrifyingtruths to learn more and add to the conversation!