Livestreamed video of the protest can be found here.

At the protest, Internet rights organizers called on Pai to drop his proposal to gut Obama-era net neutrality rules and stop attacking the free and open internet. Activists held signs reading, “Net neutrality is a racial 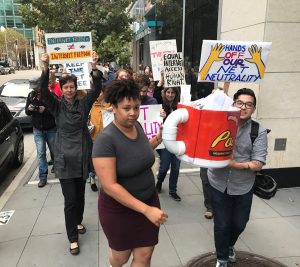 At the end of the rally activists attempted to enter the event to deliver a three-foot tall coffee mug designed to look like Chairman Pai’s own oversized mug parodied on “Last Week Tonight with John Oliver,” filled with public comments in support of net neutrality. One of the event organizers came outside and accepted the comments on behalf of Chairman Pai.

“Chairman Pai says he wants to bridge the digital divide but the fact is, that will not happen without the Title II net neutrality rules that Pai is actively working to reverse,” CREDO Campaign Manager Brandy Doyle said. “Chairman Pai may not want to talk about net neutrality, but today the Bay Area brought that conversation directly to him.”

“Neutrality as to content has been a defining cornerstone of the Internet since its inception, and remains integral to both innovation and free expression,” Shahid Buttar, Director of Grassroots Advocacy at the Electronic Frontier Foundation said. “As the FCC turns its sights on revisiting the Open Internet Order of 2015, we invite everyone who uses the Internet—whether as an entrepreneur, as a consumer, as a student, as an activist, or as an engineer or designer—to raise their voice in defense of light touch regulations that have preserved a level playing field online.”

“The open Internet has provided connection and community across boundaries and distance, allowed alternative music, art and information to find its audience, allowed small businesses and startups to find their customers and allowed activists to organize online to talk back to their government,” Tracy Rosenberg, Executive Director at Media Alliance said. “We need to keep the Internet accessible, open and uncensored. Title II net neutrality regulates the Internet as what it is – a vital utility and a public good that belongs to all of us.”

“We came together today with our community and allies to defend the Title II Net Neutrality rules that FCC Chairman Pai is determined to revoke,” Steven Renderos, Organizing Director at Center for Media Justice said. “The importance of net neutrality for communities of color cannot be overstated – from mobilizing against emboldened white supremacists online, to launching a new web series for and by people of color, our livelihoods depend on an open Internet. If Chairman Pai is as committed to closing the digital divide as he says he is, he will leave the existing Net Neutrality rules in place.”

“So many of our essential rights and freedoms are under attack right now. We cannot forget our free and open internet is one of them,” Cayden Mak, Executive Director at 18 Million Rising said. “Asian Americans depend on the protections maintained by Title II net neutrality to live our lives, stay in touch with our friends and family abroad, create and distribute media reflecting our experiences, and gather to take action with our communities across the country. Chairman Pai, we call on you to defend our freedom to connect.”

“Title II of the Communications Act is the only way for companies like Comcast and AT&T to be held accountable to the public interest,” Mark Toney, Executive Director at The Utility Reform Network (TURN) said.