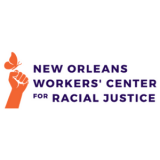 NOWCRJ is a national organization based out of New Orleans, that was founded shortly after Hurricane Katrina. Against the backdrop of a political economy that pitted communities of color against each other, a group of Black and immigrant workers came together to build a new freedom movement: multi-racial, committed to racial, gender, and immigrant rights, and dedicated to telling a new story about possibility in the Southern region of this country.